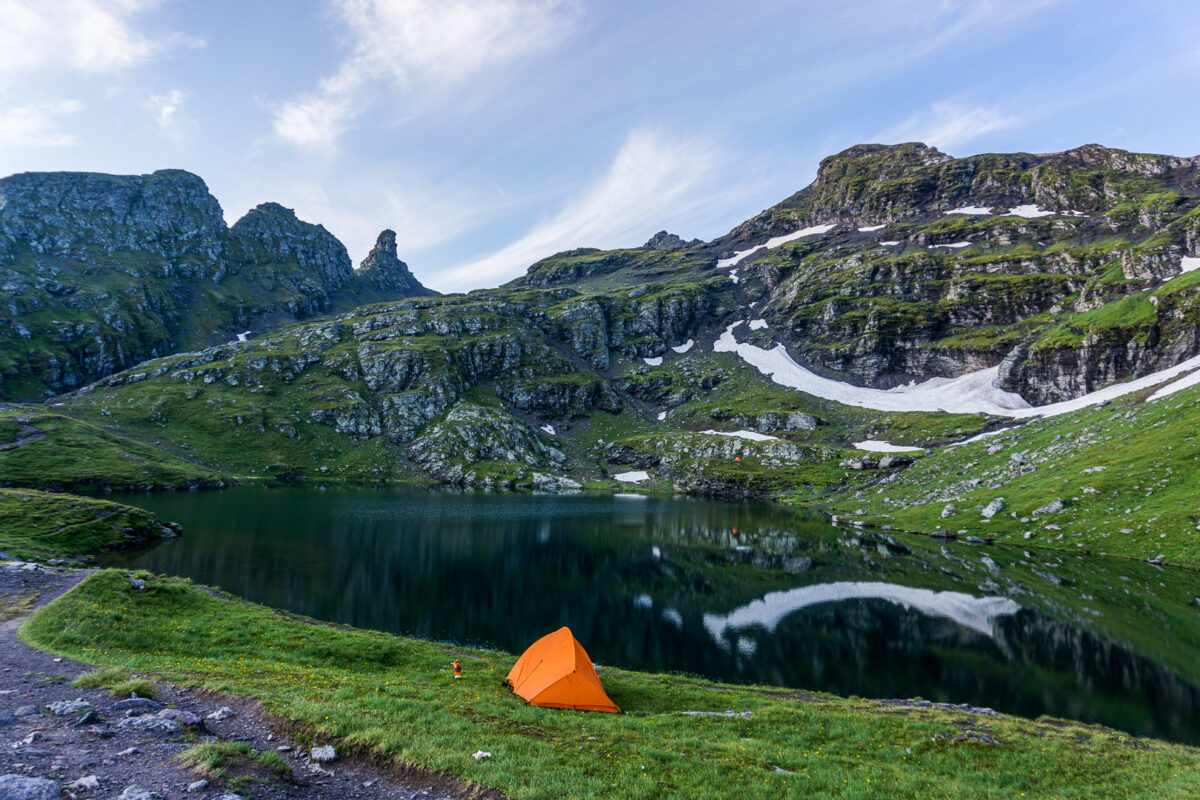 Yet another summer weekend is here and it means I need to think, where to go this time. After short search, I’ve found a hike around five lake near Pizol in Switzerland. The route seems to be not so difficult and looks like perfect fit for overnight camping hike.

First part of Saturday I’ve spent driving around few sightseeing places in this region of Switzerland, there will be a separated post about it.

Walking around the canyon, I almost forgot about my hiking plans. The parking was almost deserted when I arrived there after 4pm. It didn’t take me long time to pack the backpack and start my rout. Since the altitude difference is quite significant even to the hike starting point, it makes sense to use the cable car. To be precise, one cable car and two “chair lifts”. Round trip ticket only for cable car costs 34 CHF. But audacity is the second happiness 🙂 With the same ticket I tried to board the chailift just before the very last ride up. The maintenance guy looked at stupid myself pointing to “valid ticket”, sighed and let me go up. So I got to the middle point

Usually this hike starts from the upper station and goes clockwise. But I prefer to go any hikes in opposite direction. First of all, going up is somehow healthier (knees don’t really like descents). Second, I’d heard that this trail is quite popular and I didn’t really want to walk in a line of people. So far I haven’t seen anyone, but who knows… So I started my ascent in direction of Pizol. Weather was so-so – not really raining, but foggy and wet. However I was really enjoing the temperature because down there it was natural summer, and here, on 2000 meters, it was much more comfortable for a foot backpacker. Perfect mountain cool.

Hike “5 lakes of Pizol” is called like that because.. you won’t believe.. it goes around five lakes and it’s possible to make a couple-hours detour to conqueror Pizol summit. First of these lakes Baschalvasee is not really a mountain lake, it’s more green than blue, and it’s hiding in the afternoon shadow. However it’s still a good place for the first big break. Going further, trail climbs higher, allowing be to catch the last sunset rays before heading to the complete fog. And at some point some mysterious stone pyramids appear from the fog. Only yourself, fog and unknown pyraminds. Sounds scary, huh?

After the plateau, trail descents to the next lake, Schwarzsee. Getting closer, I can recognize several tents around here – I won’t be the only overnight guy here. There was at least three other camps except mine. It’s almost 8pm and it’s going to be dark soon, so I had decided to stop here. After setting up my tent on the hill near the shore (2370m) I try to get know my neightbors.

One man with a dog had just finished his evening walk and quickly climbed inside his tent. But there is a local girls couple with a kid. They’re quite brave, they don’t have a tent but just a three sleeping bags. Bivouacking 🙂 But what is even more surprising is that they make a campfire. For sure it’s complicated to find something flammable, but several wooden pieces still make a difference. When I asked them, I got quite unexpected reply “Yeah, sure, why not? It’s Switzerland and we’re not in a forest”. And yes, they are locals, just from the city nearby. Think of it when you hear next time about “strict Europe, very strict Switzerland”.

Why is everyone still sleeping???

Tomorrow is a new day. Indeed, there is no fog in the morning, sky is almost perfectly clear – it seems to be a great day. Hot breakfast, cocoa bring me back to life and I’m ready to continue my hike at 6:40am. After a short climb and some traverse I reached the proper mountain lake, the jewel of this hike, Schottensee. And the timing cannot be better – I catch the sunrise in a perfectly flat turquoise surface. I also see couple of tents here as well, but just one guy wandering around. Why is everyone still sleeping? Sun is up and running, and just a few hours left until this place will be full of lazy people arriving by cable car. I cannot understand how can someone voluntarily miss such a magic hours…

After yet another ascent I can see the biggest lake here – Wildsee. There is a small junction and I can see the finish point – top cable car station. But it’s just 8:30 and I still have time to enjoy the silence of surroundings, so I decide to walk around the lake a bit. I was even thinking of hiking to Pizol mountain itself (less than 400 vertical meters from the lake), but this time laziness was stronger. So I’ve just walked around the lake, had the second breakfast, found suspicious black tent on the shore and hid some geocache. Why “suspicious”? I think, because the tent was black, and it was covered with sun for quite some time. I would feel really uncomfortable in such a hot place. However no one left the tent while I was there.

During the last hour I had walked around 3 km, so I decide to slowly go back. Which is even more important, some people start to appear, and it means I have nothing more to do here. But when I got back to the junction I was naturally shocked. Yes, I knew that this trail is quite popular… But… The hike is really crowdy! I managed to walk down, maneuvering between the endless human mass and tried to make couple of pictures of it. I really, really underestimated this problem. Fortunately, for me it’s the end of the hike and it’s the least significant part of it. Of course I walk to the last lake, Wangersee, but it was nothing special, yet another green lake. Especially with crowds around, there is nothing to do there.

I managed to use all chailifts with the same audacity scheme.Down there it’s summer again, it’s getting hot again, so I change my clothes to the summer ones and put “Munich” as a destination point in my navy.

So around 170 EUR in total, which is quite a lot for my weekend trips, but the main reason here are Swiss Cable Cars. I’m not using them often, so I assume it’s still fine to try once.

Total backpack hiking ~14.5 km. Max altitude difference is from 1860m to 2530m. I really enjoy this type of hikes, not so difficult, no hardcore climbing – it’s perfect for overnight hike. It could be even a bit longer maybe. Yet another good thing here is that hike is quite diverse: it’s going up and down, going through different lakes and landscapes, so you won’t be bored. The only thing – you have to start it in the evening and finish before 10am. In other case, it will be completely spoiled my enormous crowds. Don’t do that, please.